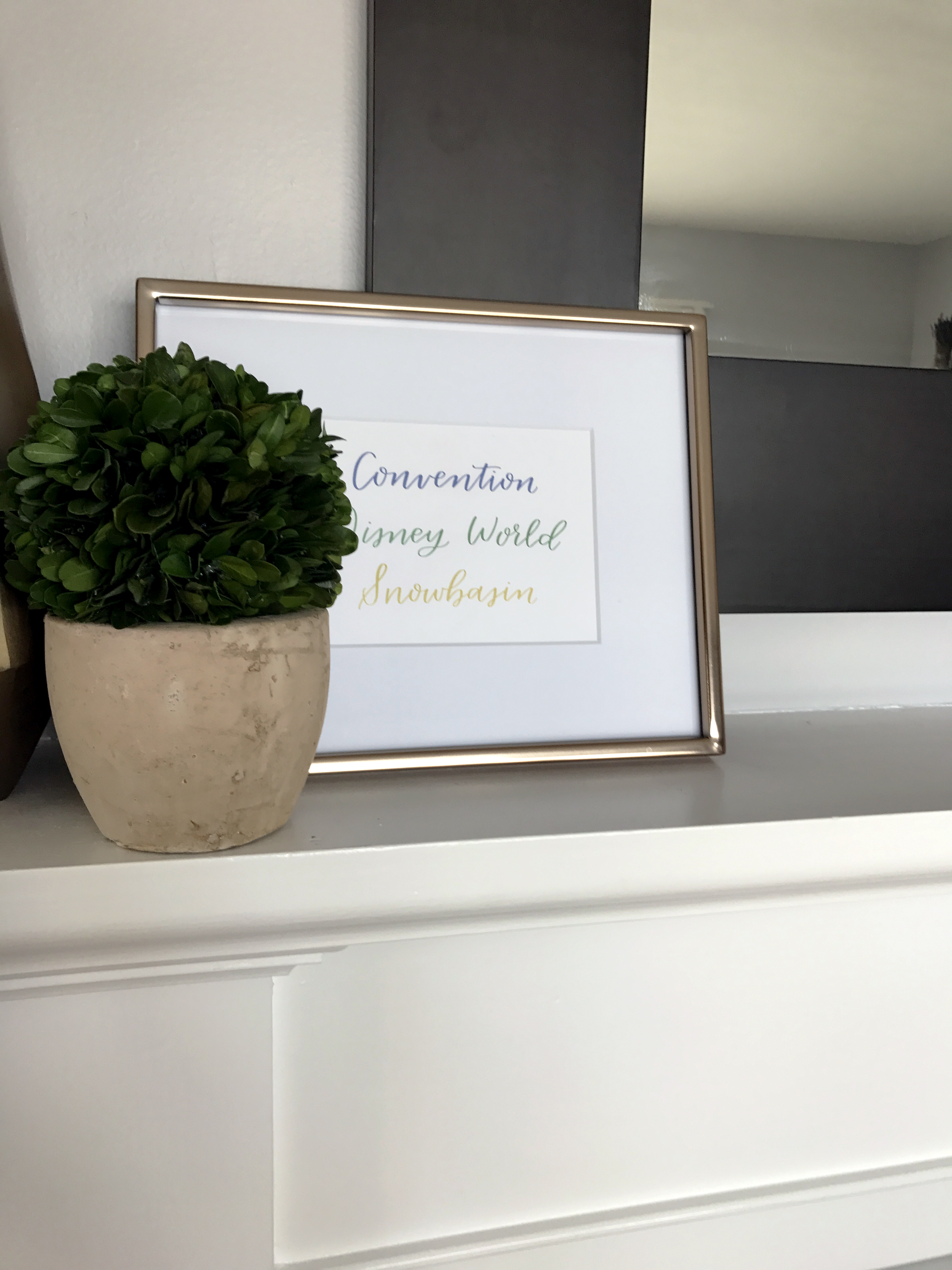 Now that we’re getting a bit more settled, it was time to decorate our mantel  in our living room. Although we had a fireplace in our first house, we didn’t have a mantel.

We wanted to make sure it had balance, movement and tied in with the rest of the room.

Here’s how it went:

The only item that was previously owned was the Crate & Barrel mirror below that we received as a wedding gift from my family. We designed everything around the mirror.

Obviously, the first step was hanging it. Brian, as always, was the muscle for the project. After he sweetly hung the mirror, I was a big jerk, and made him do it all over again. We realized the prior to hanging the mirror, we hadn’t communicated on where it should be hung: he assumed it should’ve been in the middle of the wall and ceiling whereas I thought it should be 2-3″above the top of the mantle.

The big lesson learned: talk about what we want before hanging anything in the future. And not pictured here: the large holes in the chimney that Brian patched and filled. He did a great job – you can’t  even tell there used to be holes!

Brian is the best and hung the mirror again. Before (6″ above the mantel) and after (3″ above) pictures are below. (And for any Disney and/or UP fans we decided that the Paradise Falls jug didn’t belong on the mantel and we relocated it a nook in our entry, but maybe that’s a post for another day.) 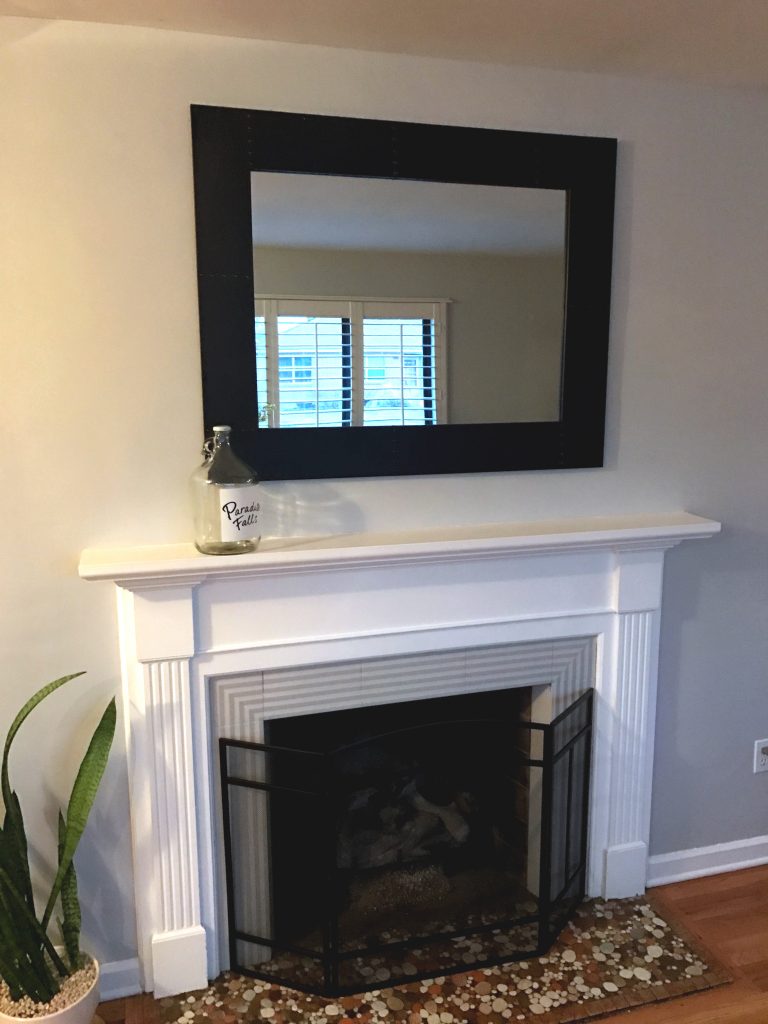 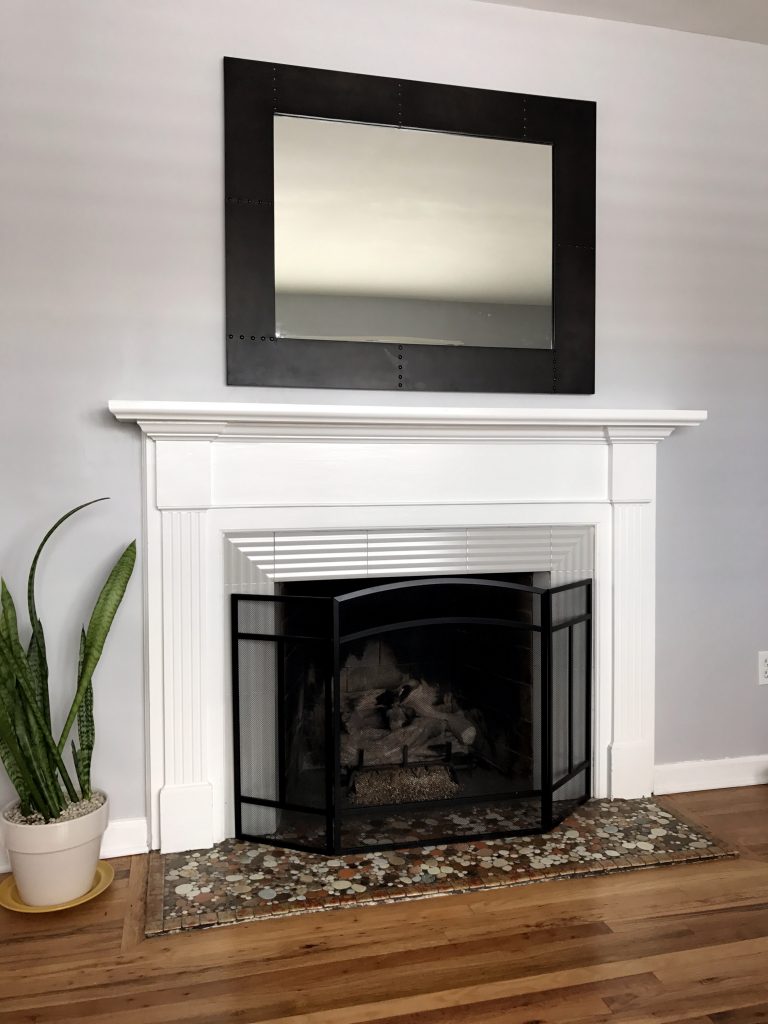 Lucky for us, West Elm was having a significant sale on everything in-store because of upcoming inventory. As a result, I found everything below at relatively reasonable prices. 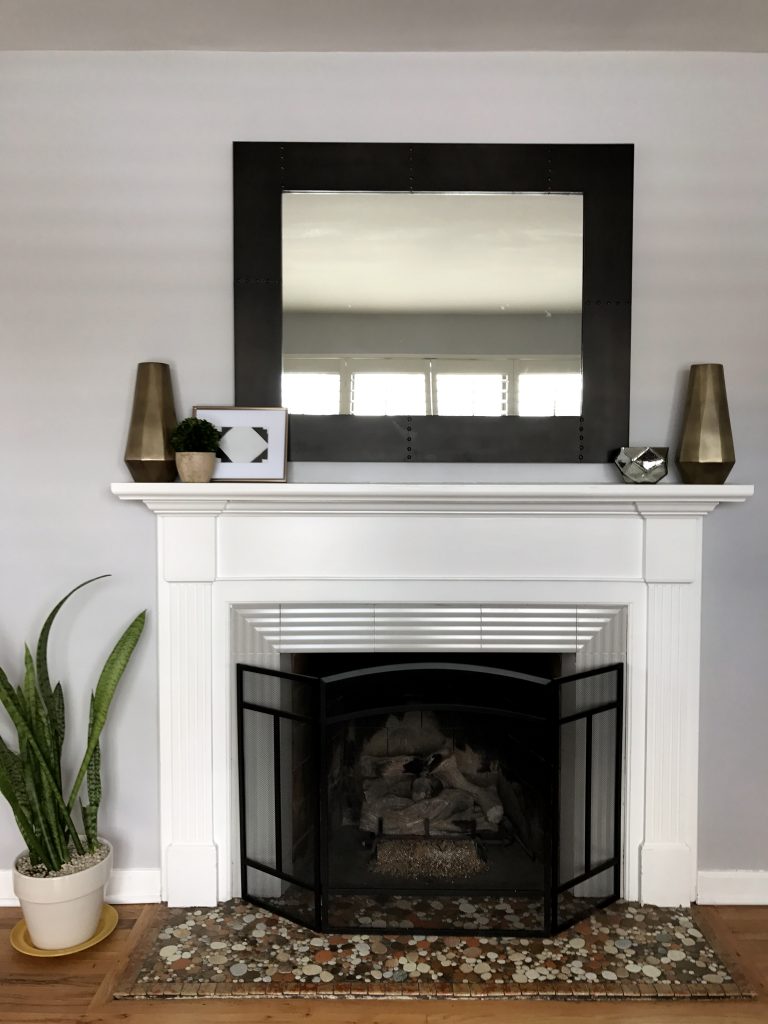 Now I love designer twigs from places like Crate & Barrel and West Elm just as much as the next gal/guy, but do I want to spend $25 for stick? Yeah, no. To the local craft store we went. 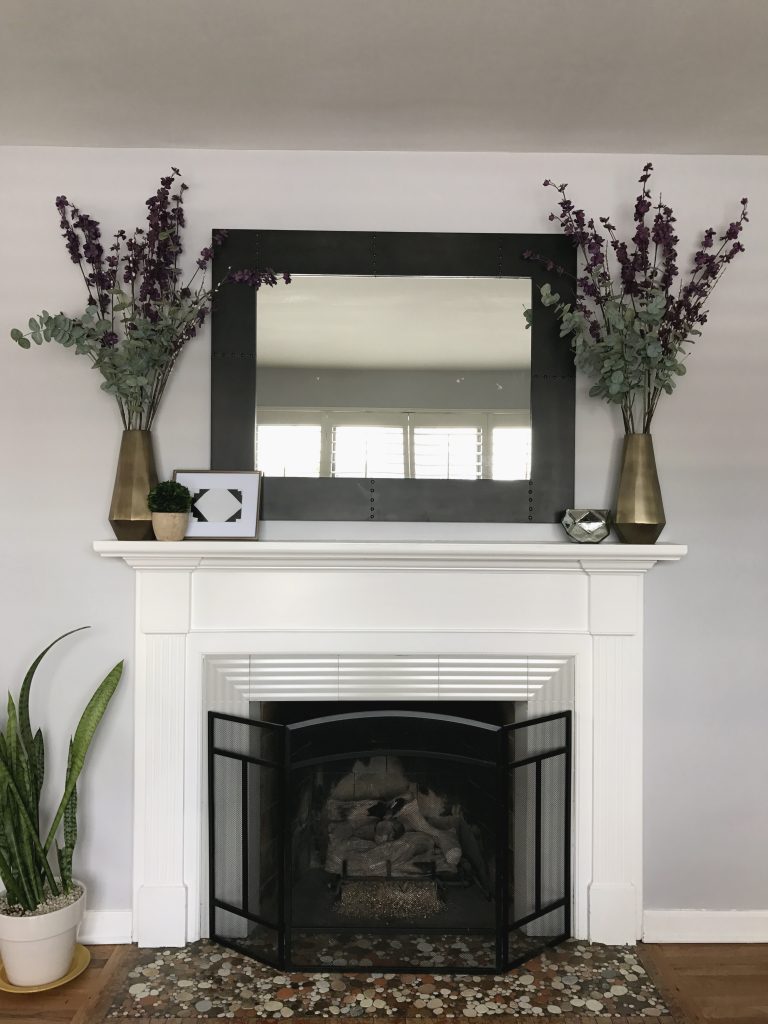 Step 4: Getting Personal From Yennygrams

I had a very specific idea of what I wanted to put in the mantel’s frame. Luckily, I have a friend, Kate, from Boston University who has a design and calligraphy business, Yennygrams, who could help me out.

I just wanted a simple piece of word art that told our story: we met at Salt Lake County Democratic Party Convention and became friends, we were engaged at the Tower of Terror in Hollywood Studios at Walt Disney World and were married at Snowbasin in Utah. The art also ties in the colors from the rest of the room. Kate did a great job and I’m really happy with it! 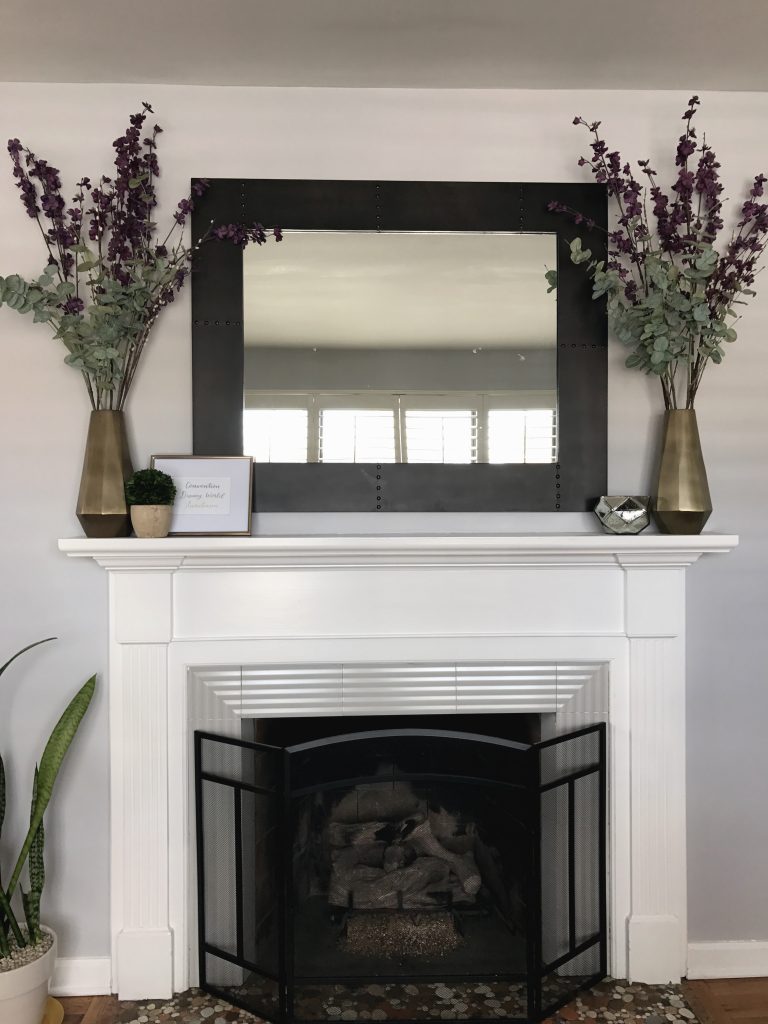 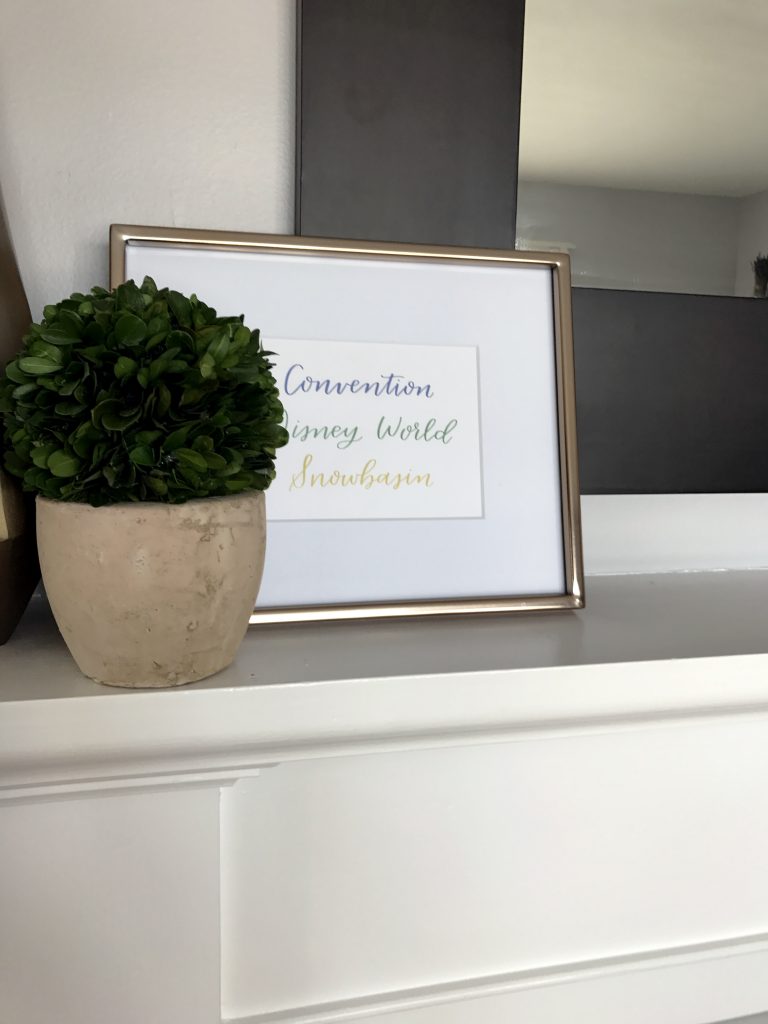 To add height to the West Elm candle holder, I found two antique books at a local consignment store. One also ties in the blues from the rest of the room. 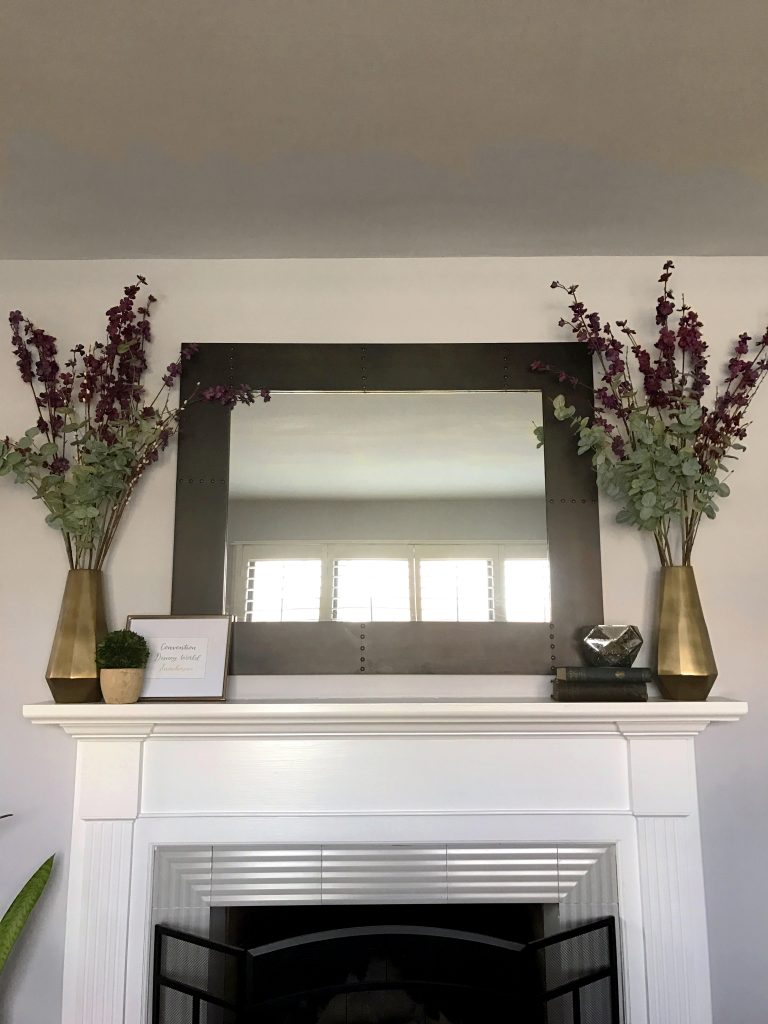 A Tale of Basement Demolition, Dead Mice and a Design Dilemma