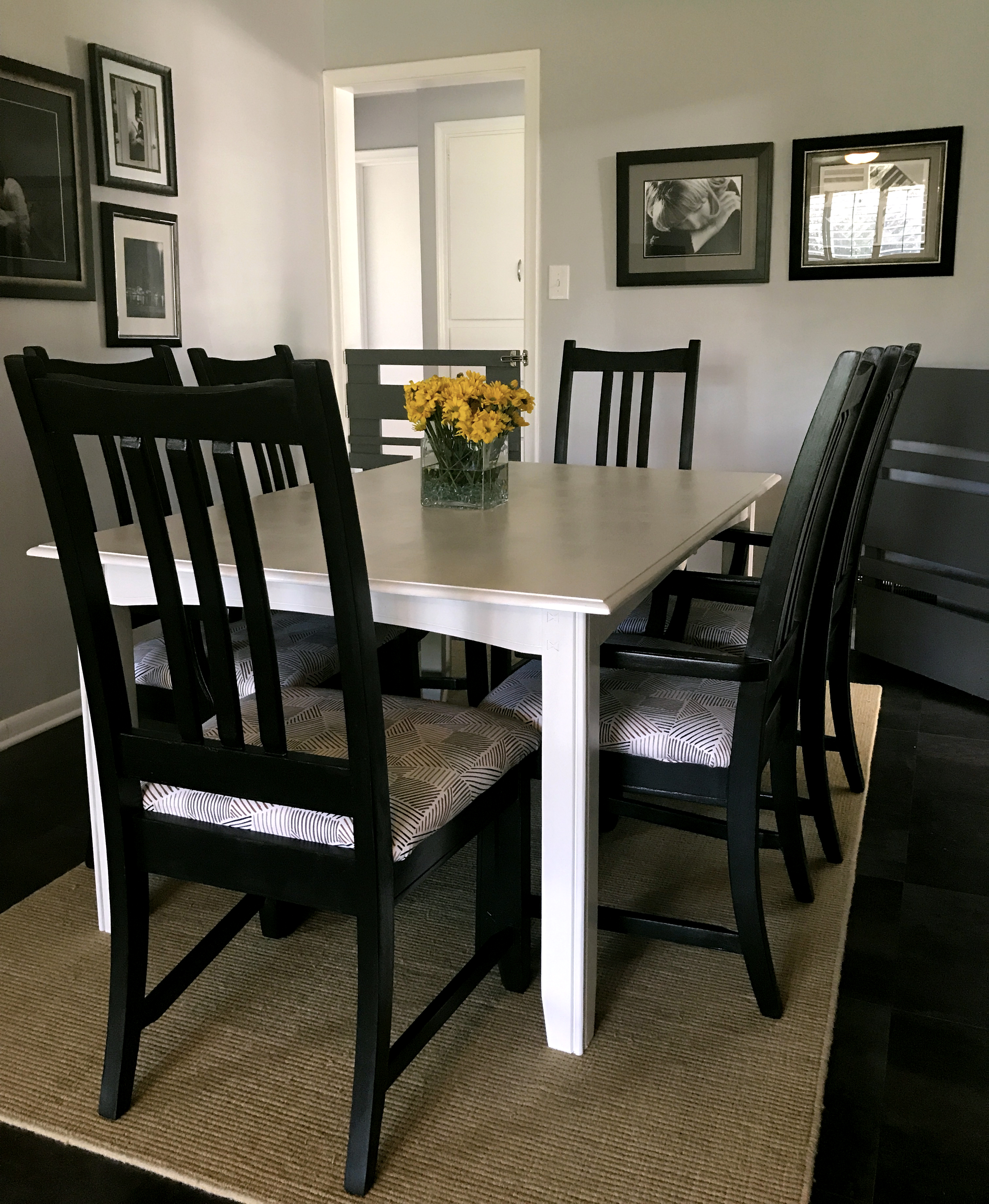 Refinishing and Reupholstering the Dining Table

After a months-long break, we’re back. We’ve done a few things since our last post: we removed the world’s strongest clotheslines from our backyard, did some major spring cleaning in our backyard, and (somewhat) planned the entire future layout of our house. In between, we trained and ran our first marathon, so no blog posts for you, our few devoted readers. 😉 Now that our days of endless running are over (for now), we decided to refinish and reupholster our dining room table.

Before we get started, I’ll just be frank: this project took a long time. We had a much different design idea in place when we started. (I’ll share more below). But, part way through we realized how terrible that idea would’ve turned out. To be totally honest, if I had to do it all over again I’d probably do the chairs differently (maybe teal-ish/aqua paint and a brown textured fabric?). Although we worked with what we had, and we learned something from this. (America’s Next Top Model Tyra Banks throwback anyone?)

Brian received this table for free from a friend of ours a few years ago when she was remodeling her home. A new table would obviously be preferred, but this was a much more affordable route. (Yeah, these photos are terrible. But  before photos are supposed to be bad, right?). Then again, I’ve mentioned the terrible lighting in our house, so the after probably aren’t much better. I guess that’s just another project! Or I need to get better at Photoshop… 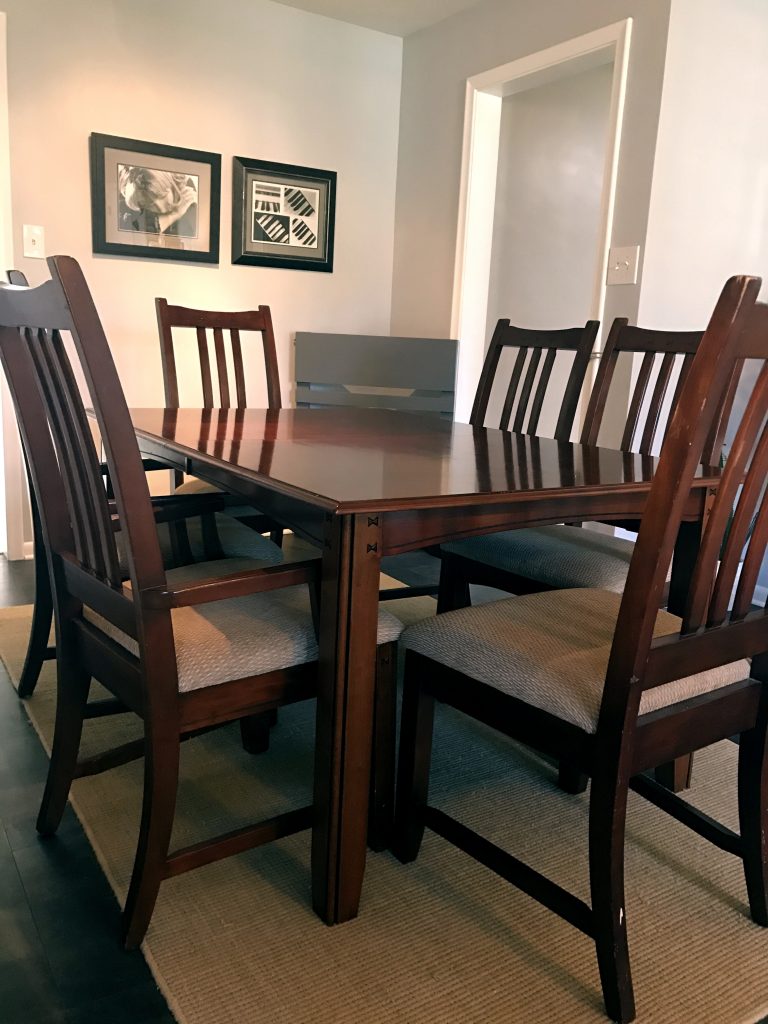 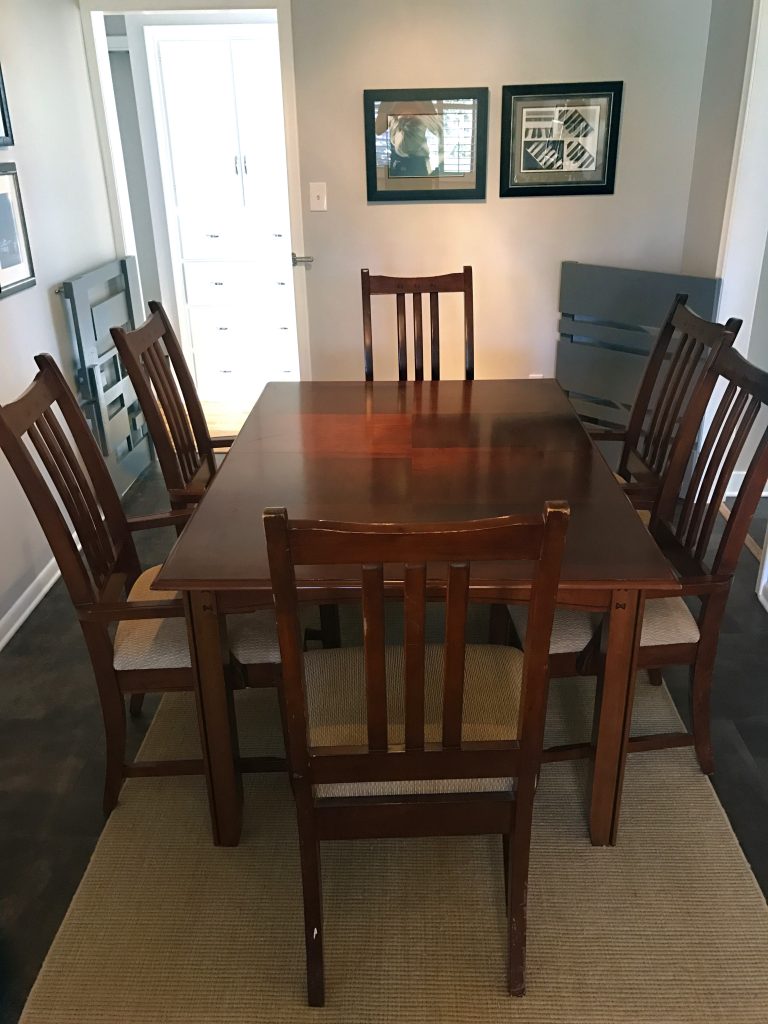 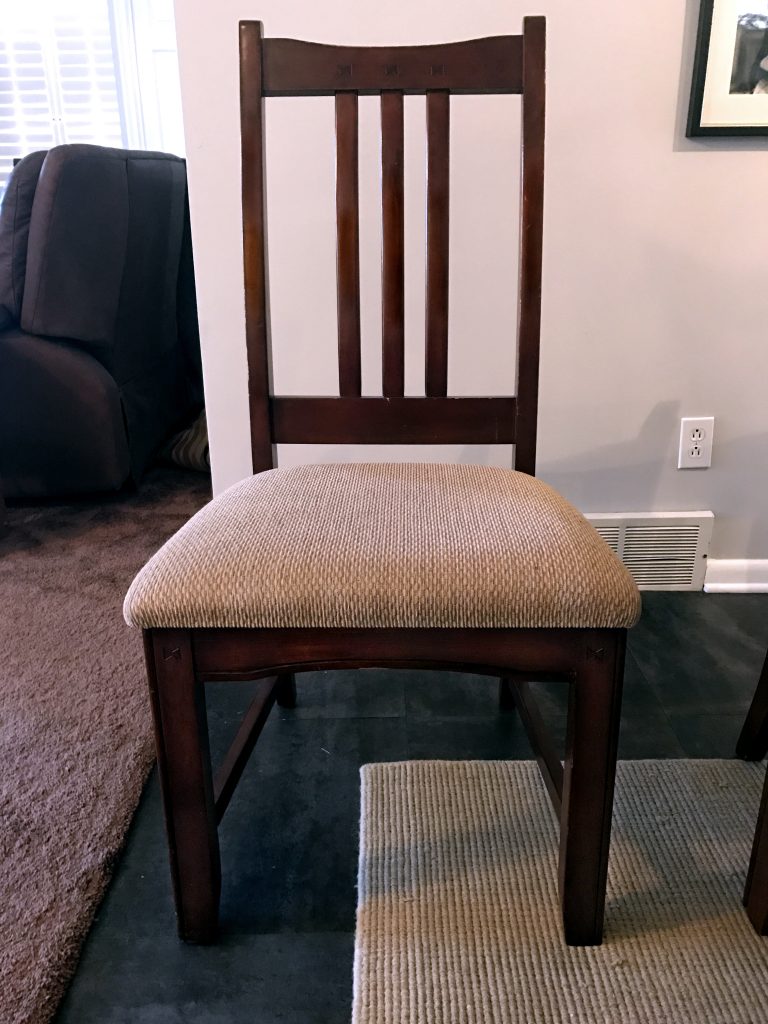 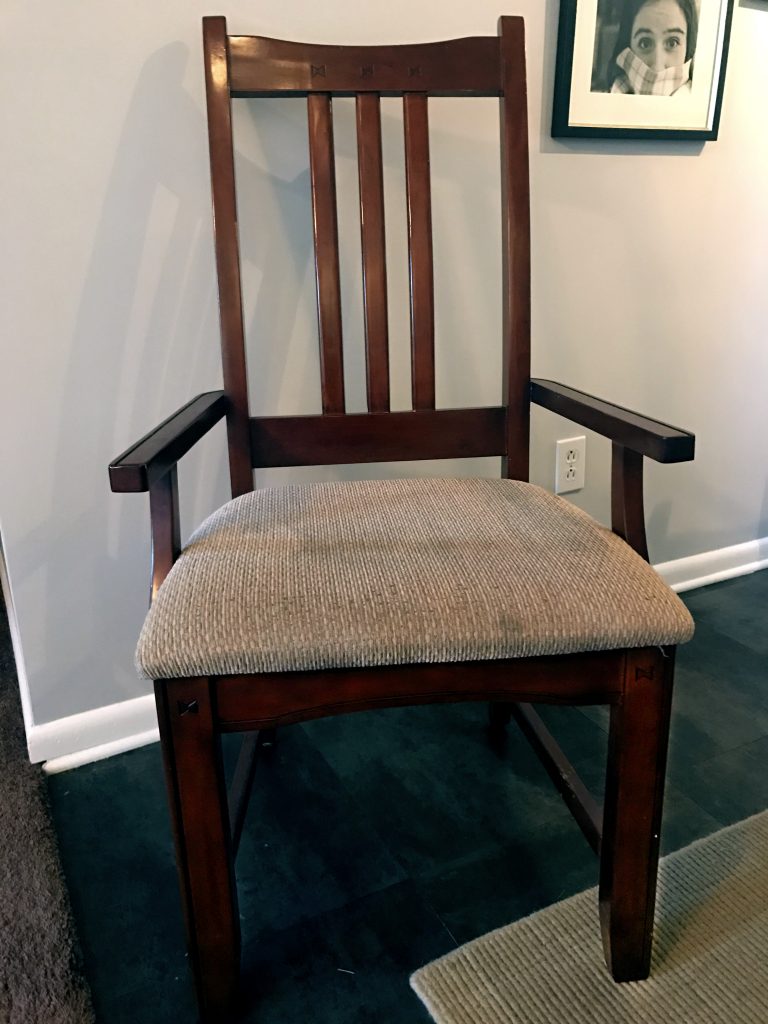 So to start things off, we started by sanding everything down. This is where things got hung up. We initially planned to paint the table black with Behr Off Broadway paint, stain the chairs with a lighter stain, and reupholster them with a blue fabric. However, halfway through sanding we realized that’d be fugly. 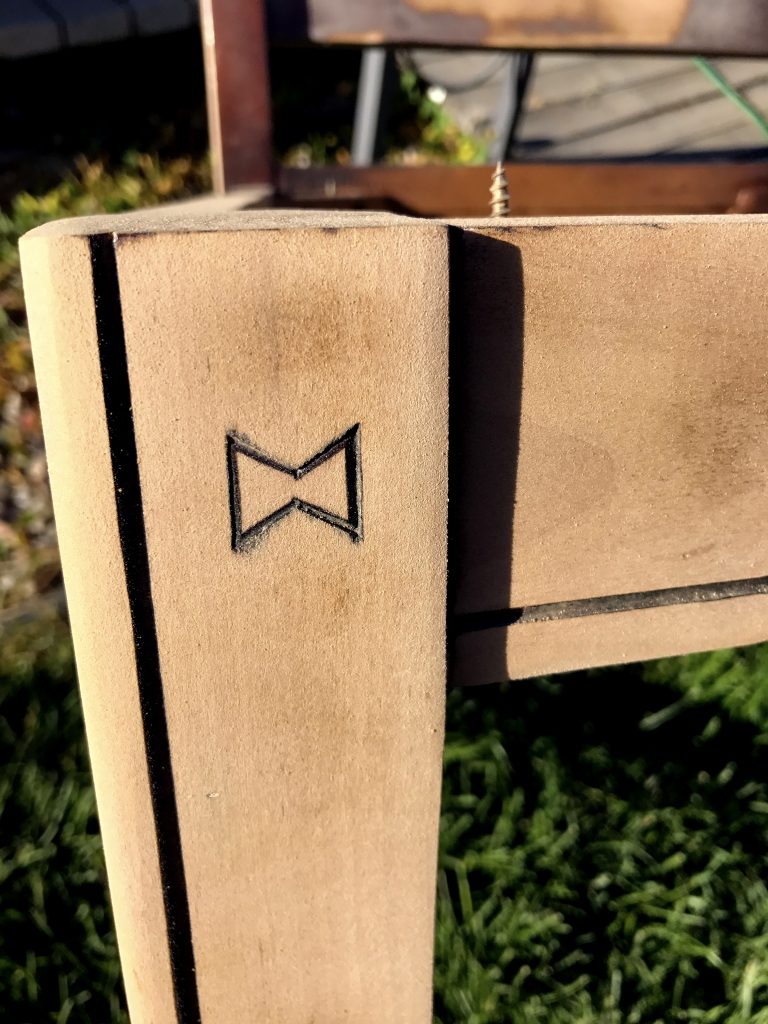 Both the chairs and the table have the designs pictured above etched in them. If we’d stained the chairs these areas would have remained dark and the chairs would’ve been a weird modern, rustic combination. There was no way we were going to sand all that detail either. Bad planning. We changed our plan about four times after this realization. (It didn’t help that we had already purchased a gallon of Off Broadway paint and couldn’t return it.)

After a lot of back-and-forth, we finally decided on our final plan, which involved several returns – just not the Off Broadway paint. If we were just painting, we didn’t need to sand everything to the grain. Oh well – here are pictures to prove we did . (If you ever want to refinish furniture with paint, you only need to scratch it up with 100-grit paper, enough to remove the finish, so paint will stick.) 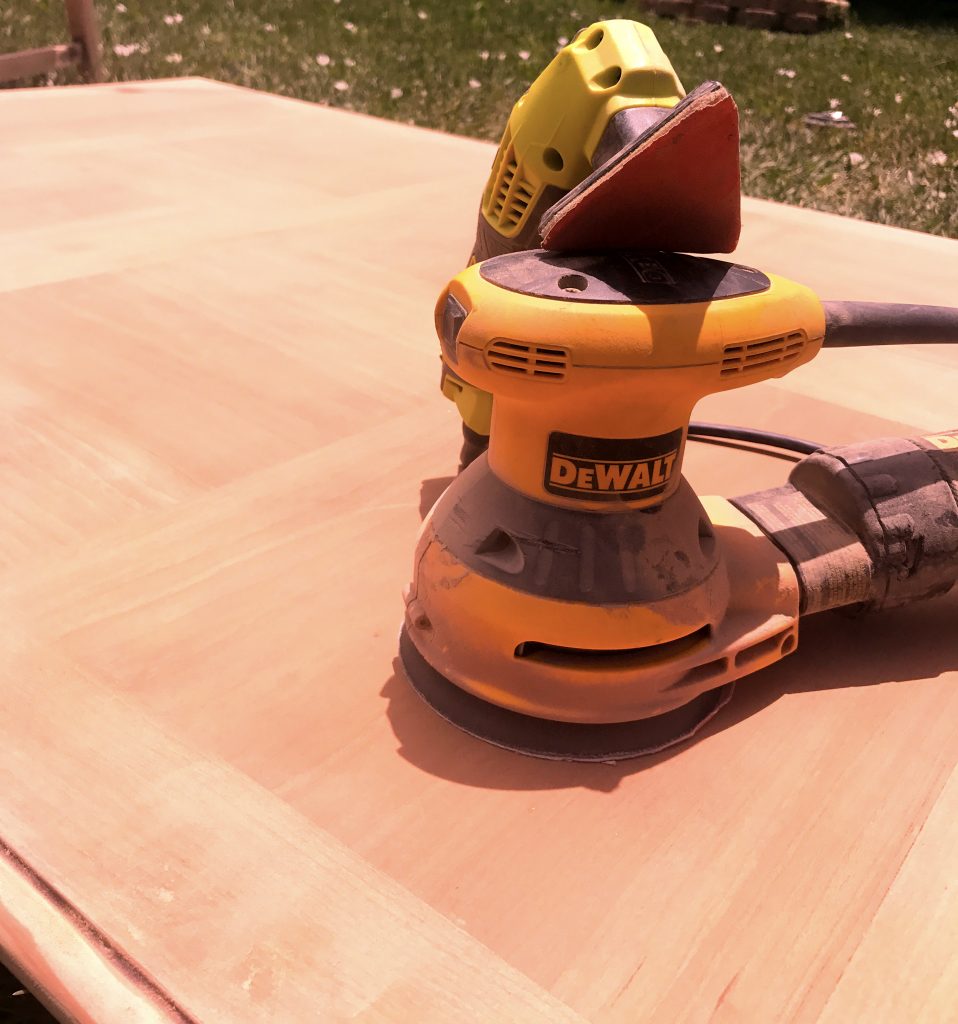 The next stage was much easier. We purchased Behr Marquee paint because it contained paint and primer. We had a lot of the Off Broadway paint already, so we threw that on the chairs and chose the Painter’s White to give the table a lot of contrast.

The least time consuming portion of the project was the reupholstering. We removed the staples from the cushions with a flathead screwdriver. Then we just used the old fabric as a pattern to cut out fabric for the new cushion. 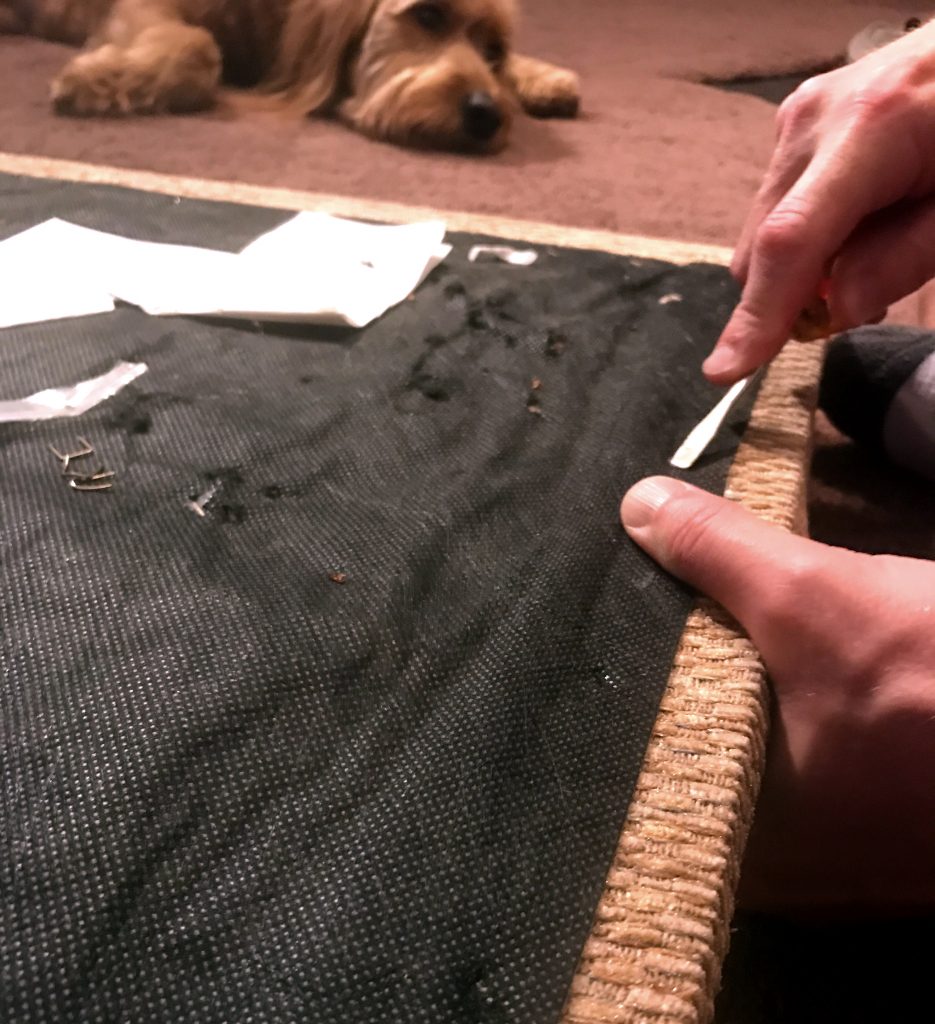 (Total side note, regarding the fabric we/I chose, Brian gave me the most epic eye roll  when he saw it was from the Nate Berkus line at Joann. “Of course that’s where it’s from!” He made fun of me for binge watching Nate and Jeremiah By Design on TLC earlier this year. The first season is over, but you can catch it On Demand and defend my honor!)

Putting the fabric on the chairs was relatively easy too. We basically wrapped them like Christmas gifts and made sure to pull the edges tight and even and they turned out a-okay. 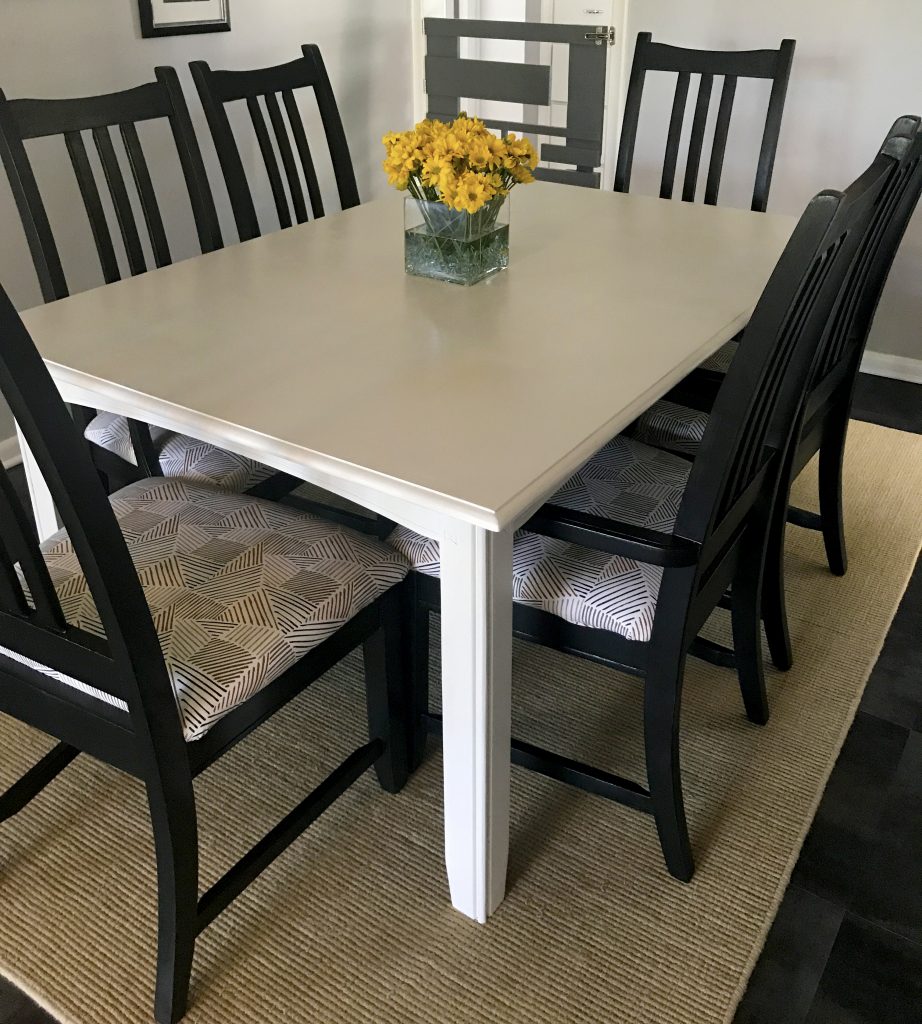 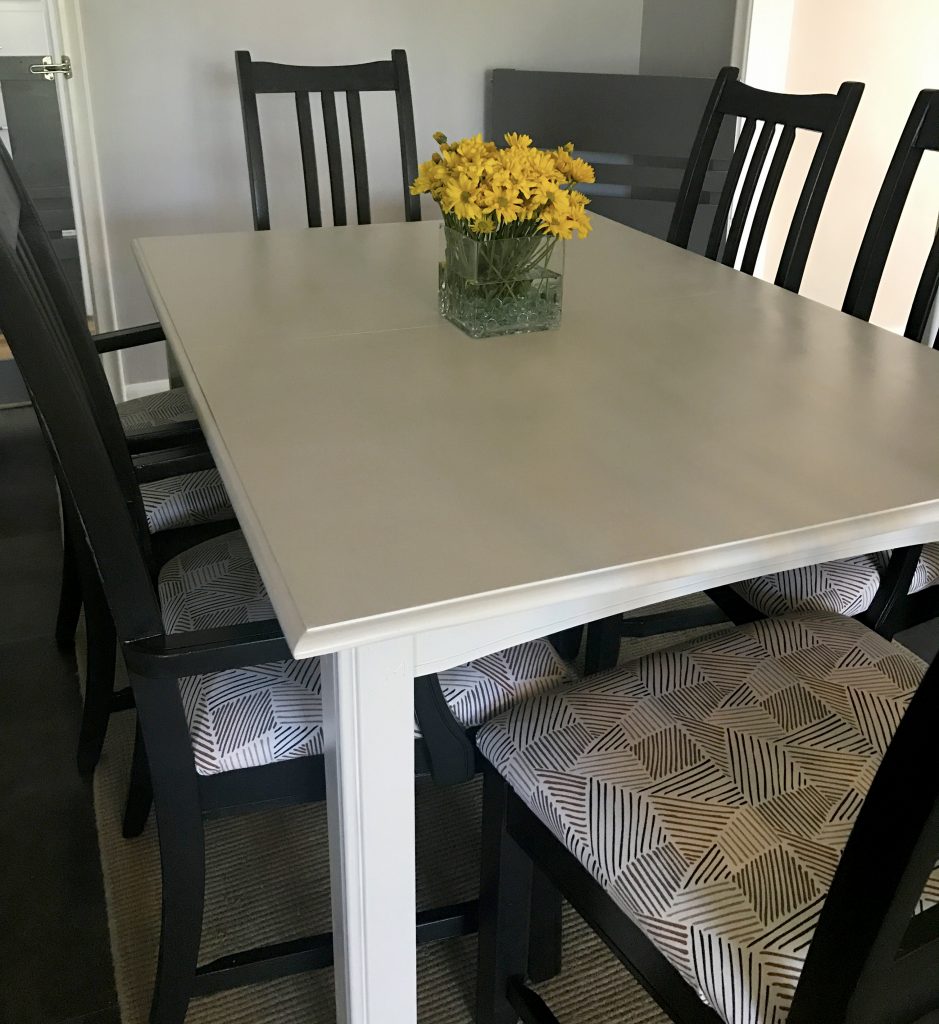 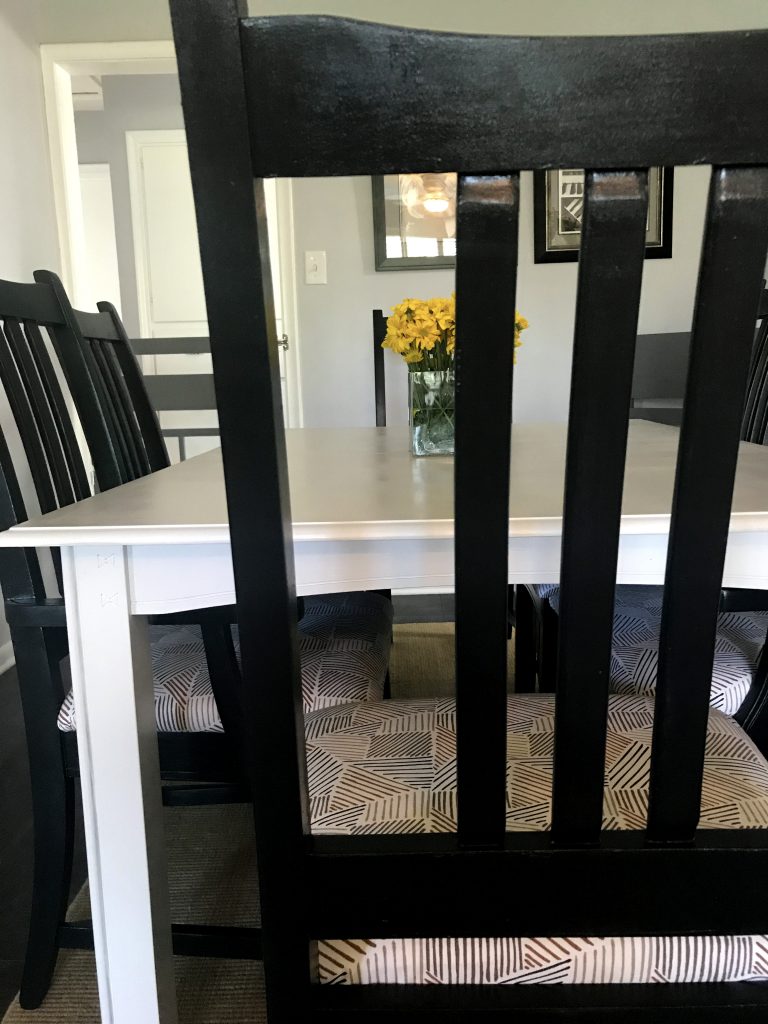 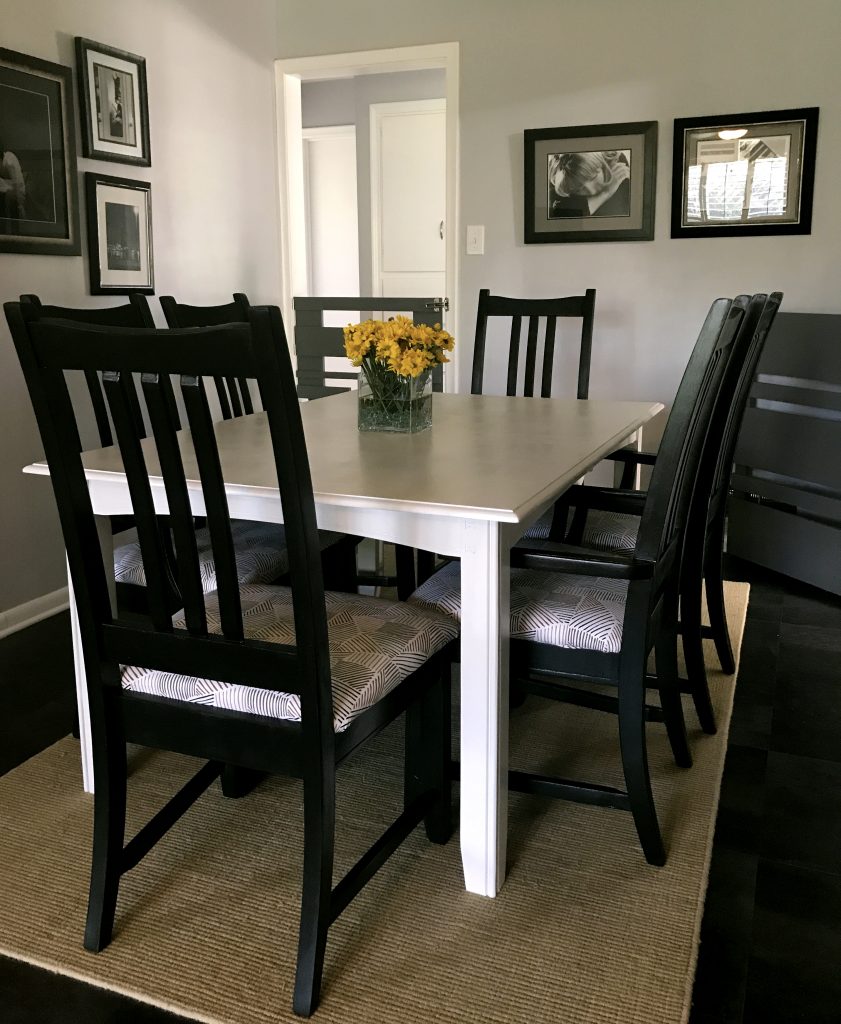