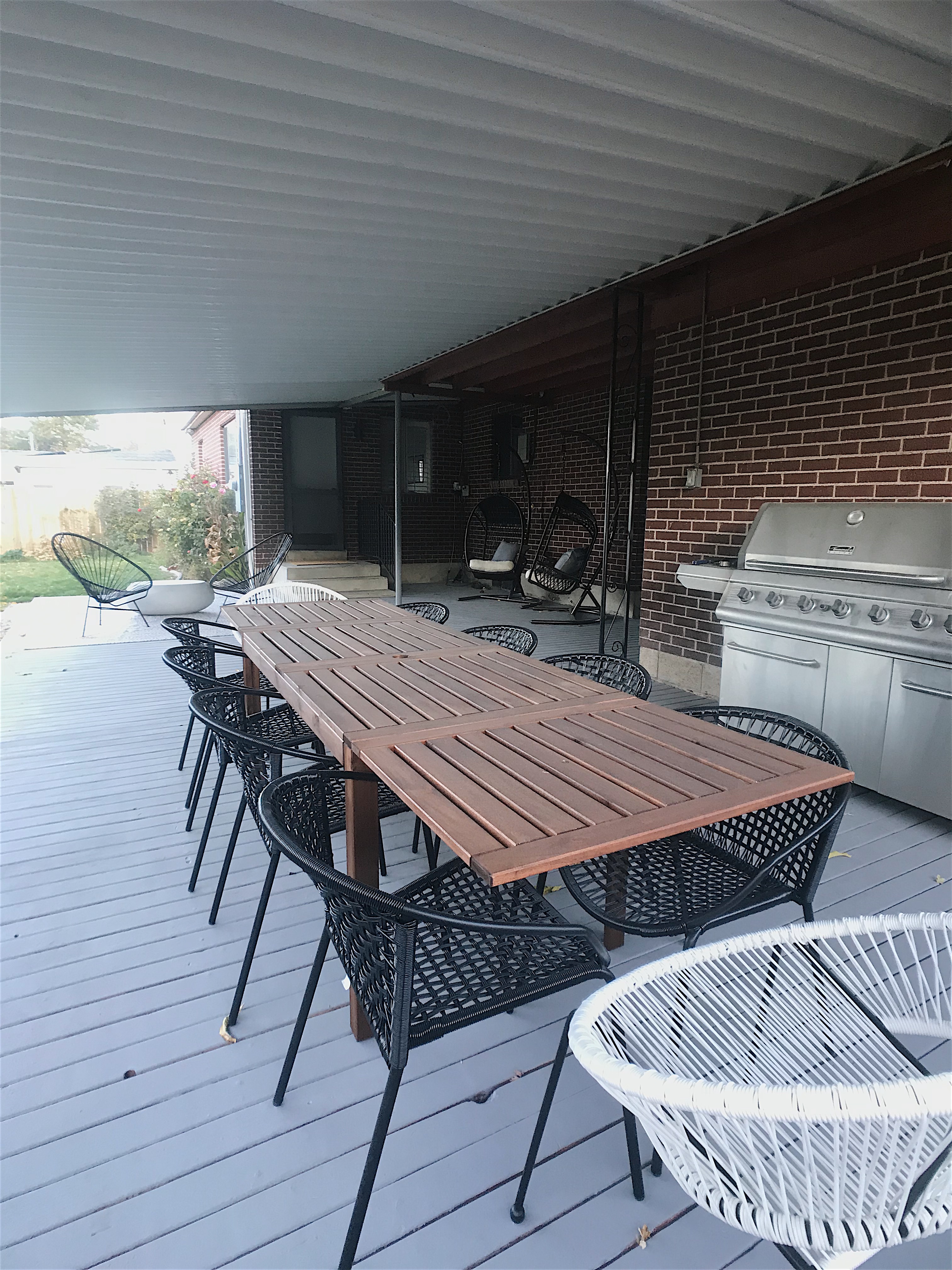 Well, we are long past our September 15 deadline, and snow will soon be falling here in Salt Lake City, so it’s time to share where we landed with our deck project.

Let’s start at the beginning. Here are a few before photos to remind you where we started. You can see additional before photos (and our original inspiration board, which we deviated quite a bit from in the end) by clicking here. 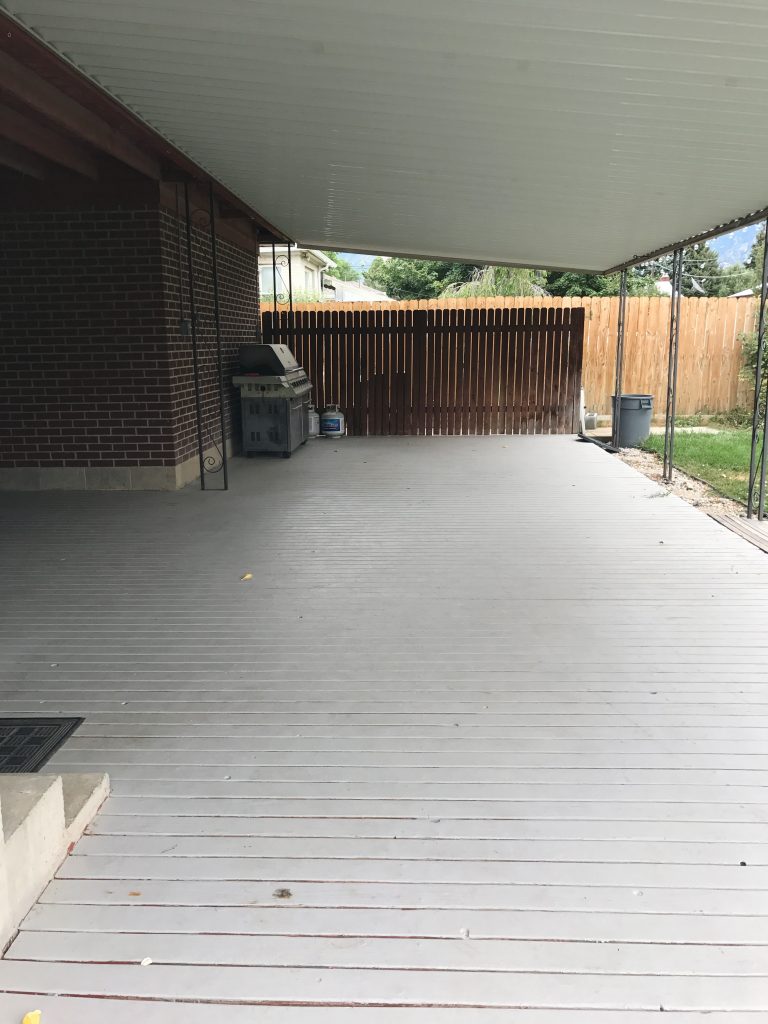 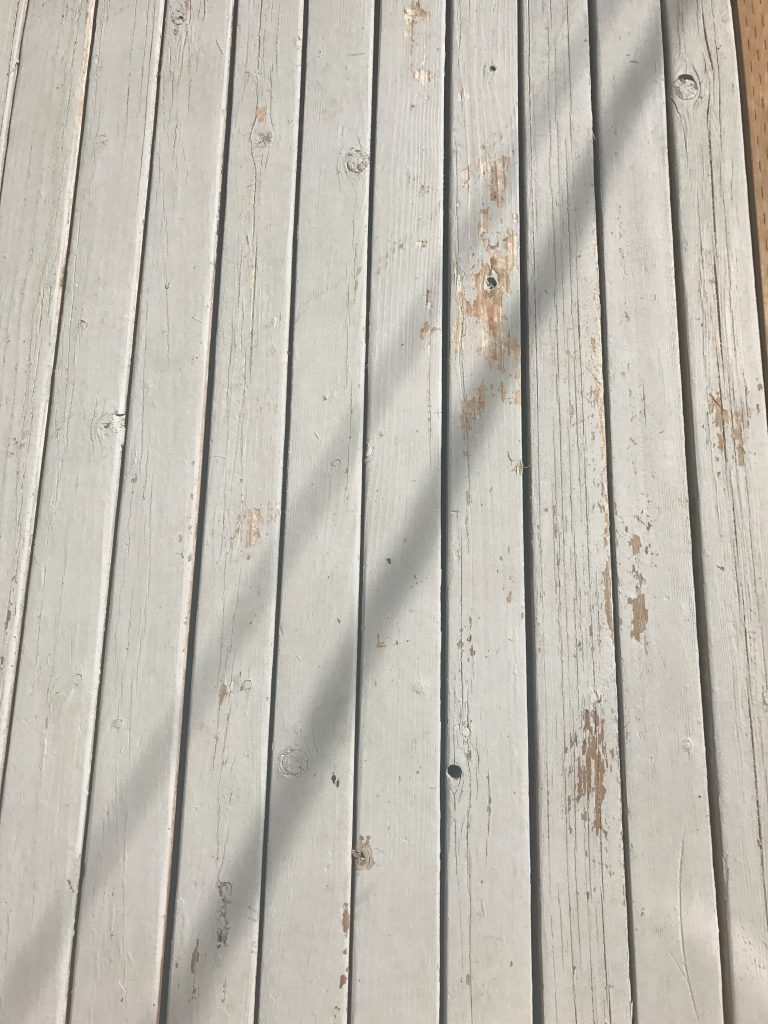 First up, was getting rid of the strange fence on the east side of the deck. We still can’t figure out what function it ever served. It only took a few hours and a hammer to take down. The most “difficult” part was filling in the fence posts with cement, which took less than an hour; just a quick trip to Home Depot and voila. 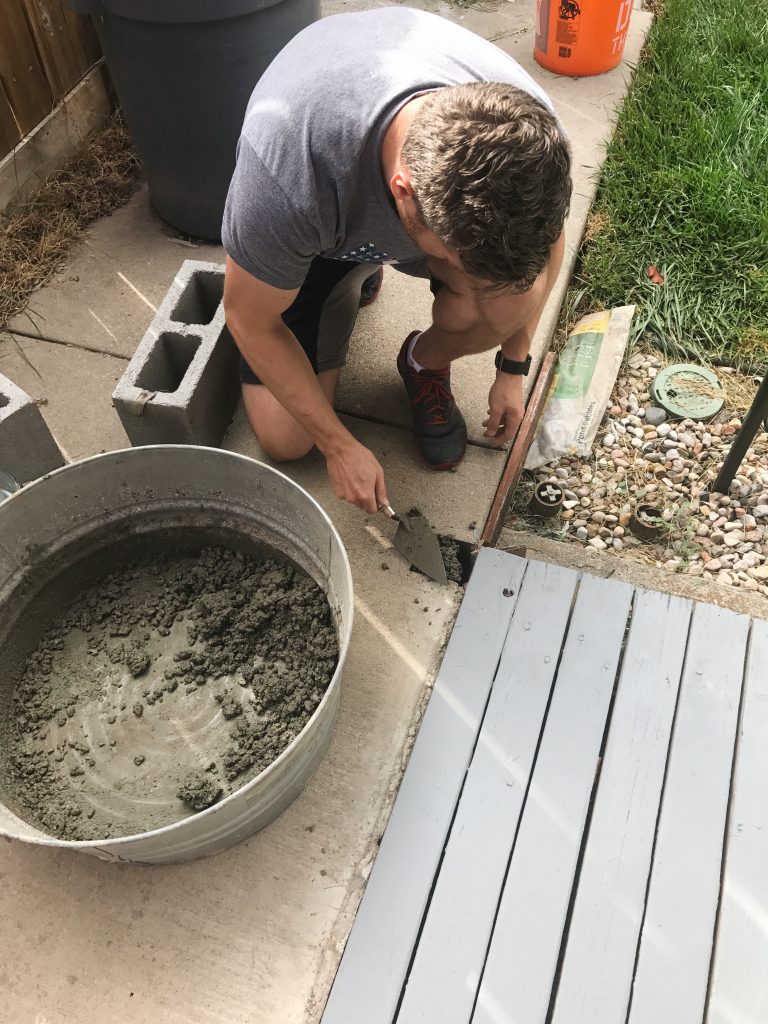 You can also see that the paint itself was in rough shape. We suspect it wasn’t outdoor quality paint and as a result, the wood piece on the west end of the deck was rotting and breaking apart. 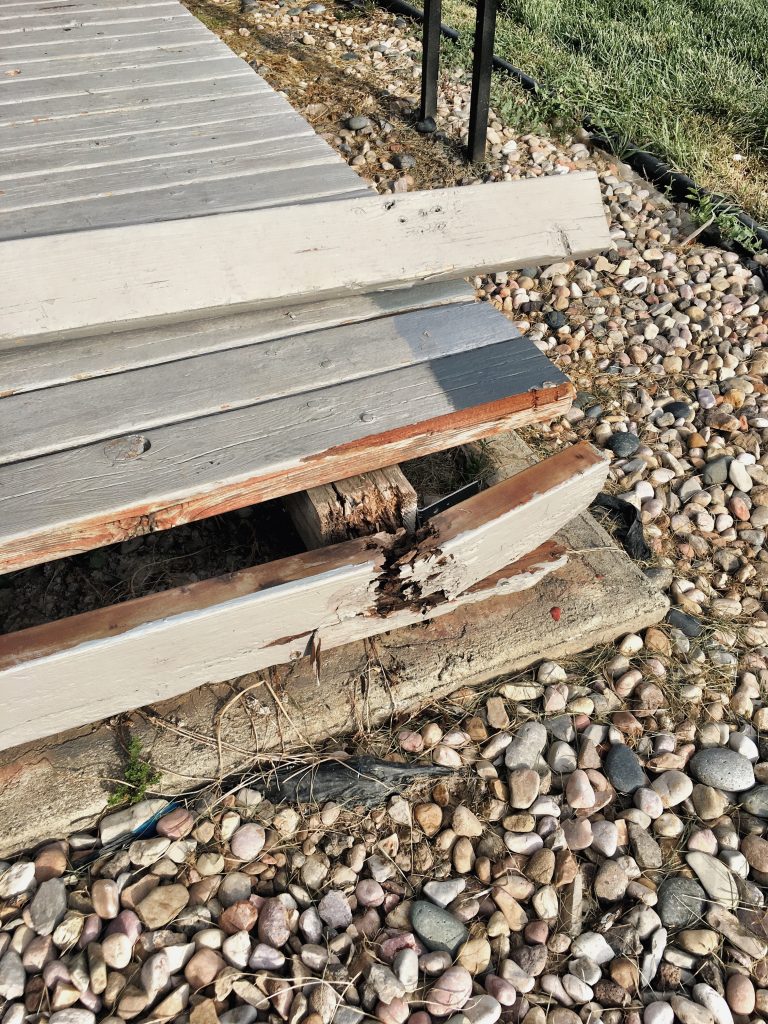 With a couple long screws and pieces of pressure treated lumber later, it looked as good as new (Frodo and Ellie were more than willing to help too!). 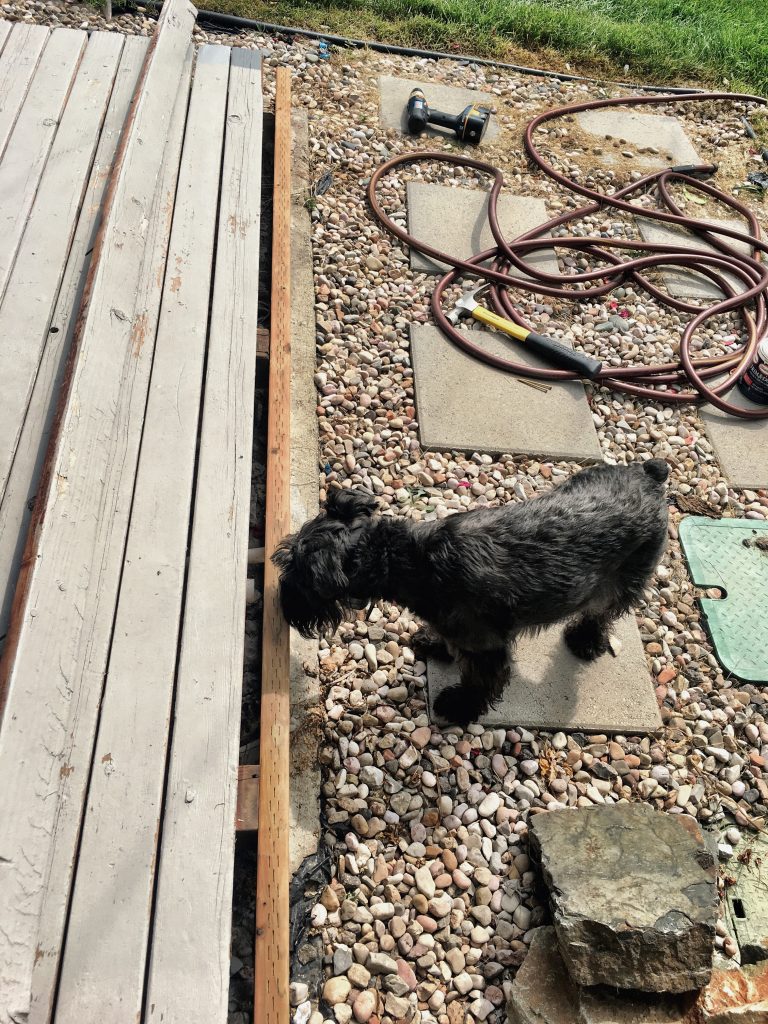 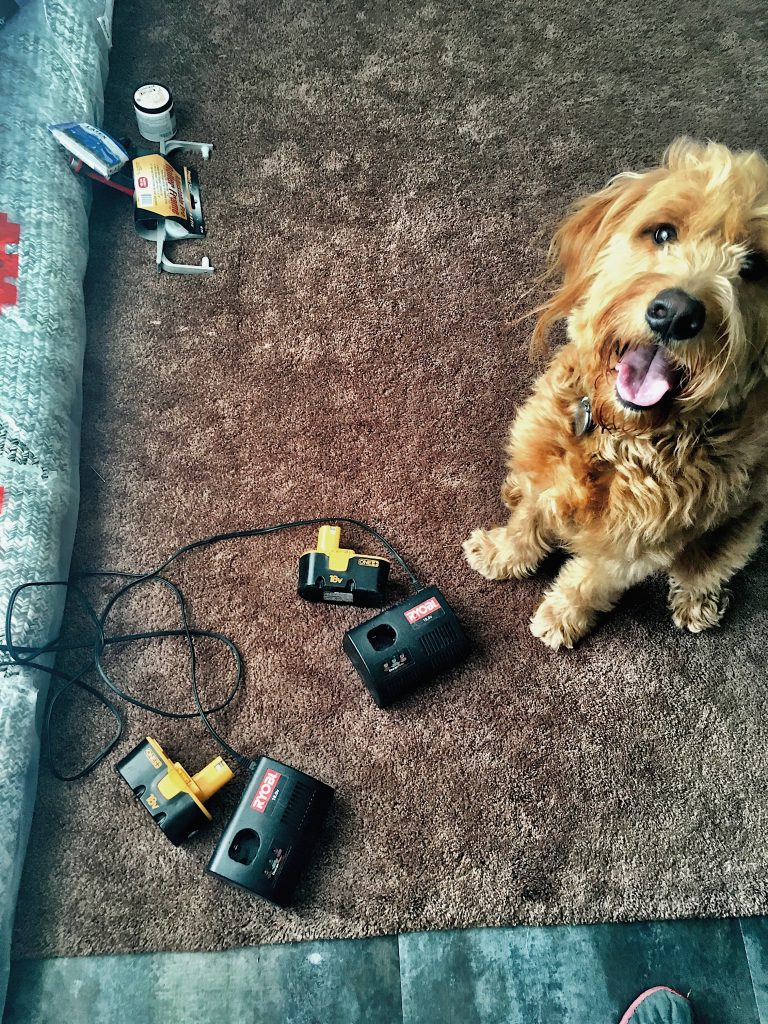 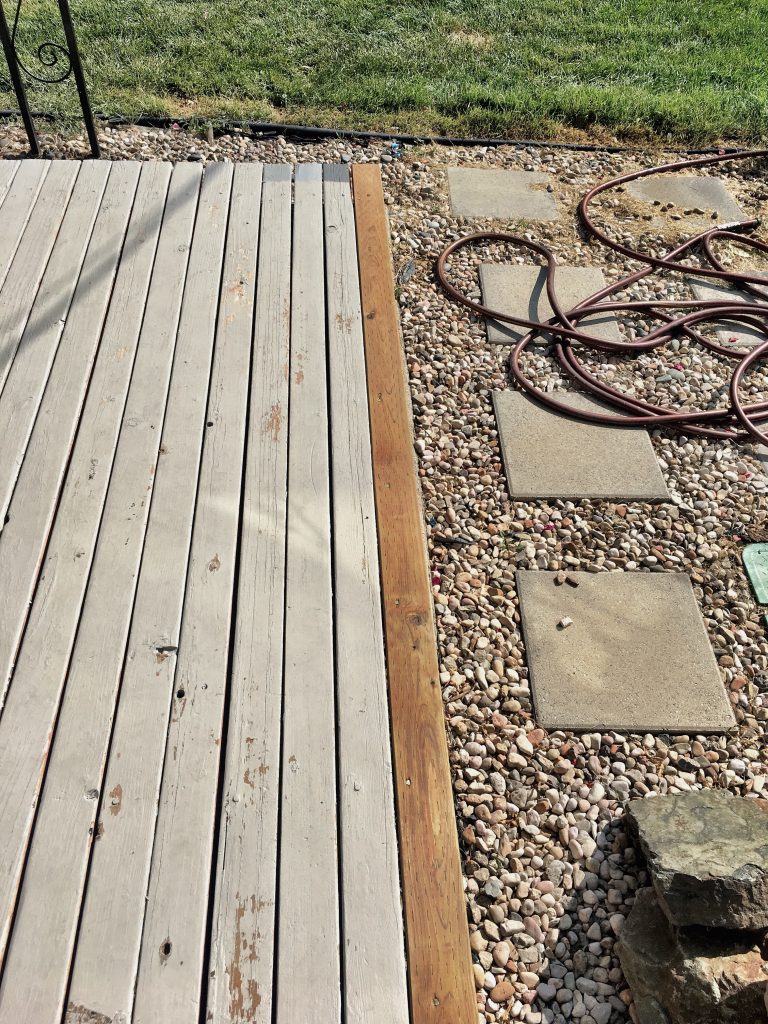 Finally came time to paint, we really didn’t want to sand and paint the whole thing again, so Home Depot’s Behr Deck Over product was our best bet. We chose Slate Gray, which was slightly darker than the original color but wouldn’t contrast too drastically with the house. While the Deck Over product is rather expensive, we’re hoping it will prolong the life of the wood. It’s incredibly thick and a number of people who have glanced at it have thought the newly painted deck was Trex!

Here’s an after (which you actually got a preview of in the cement photo above… ha). 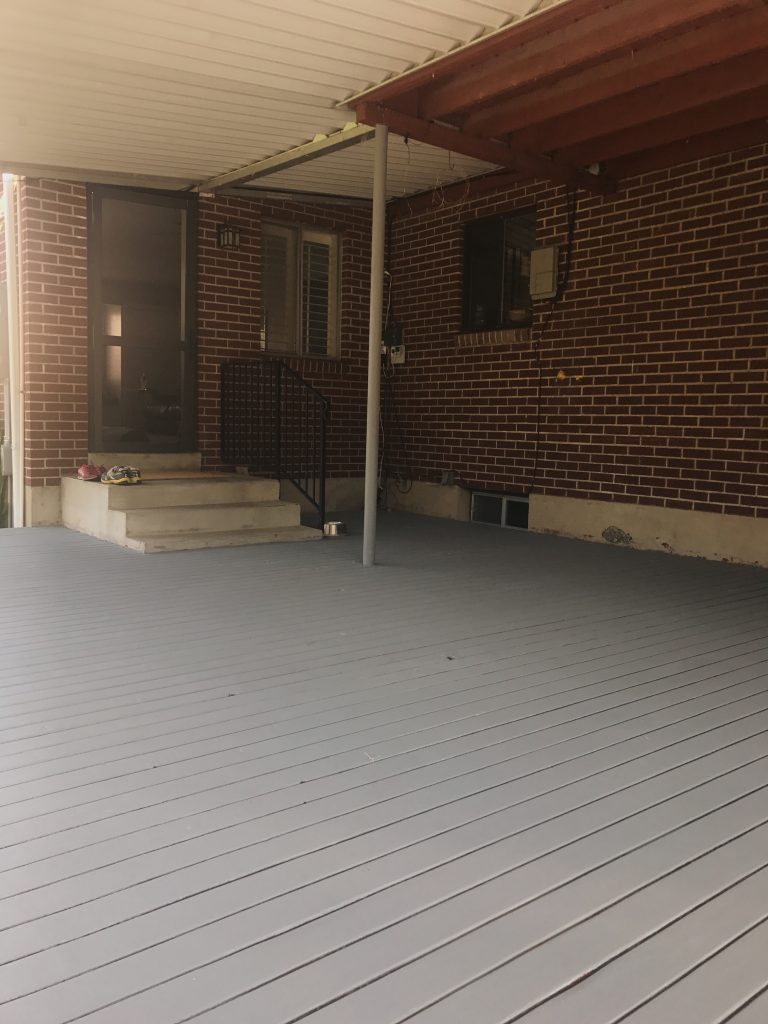 We also painted the posts surrounding the deck black (we painted them before we painted the deck). They were a faded brown prior to being painted, and we wanted them to pop with the new gray deck. 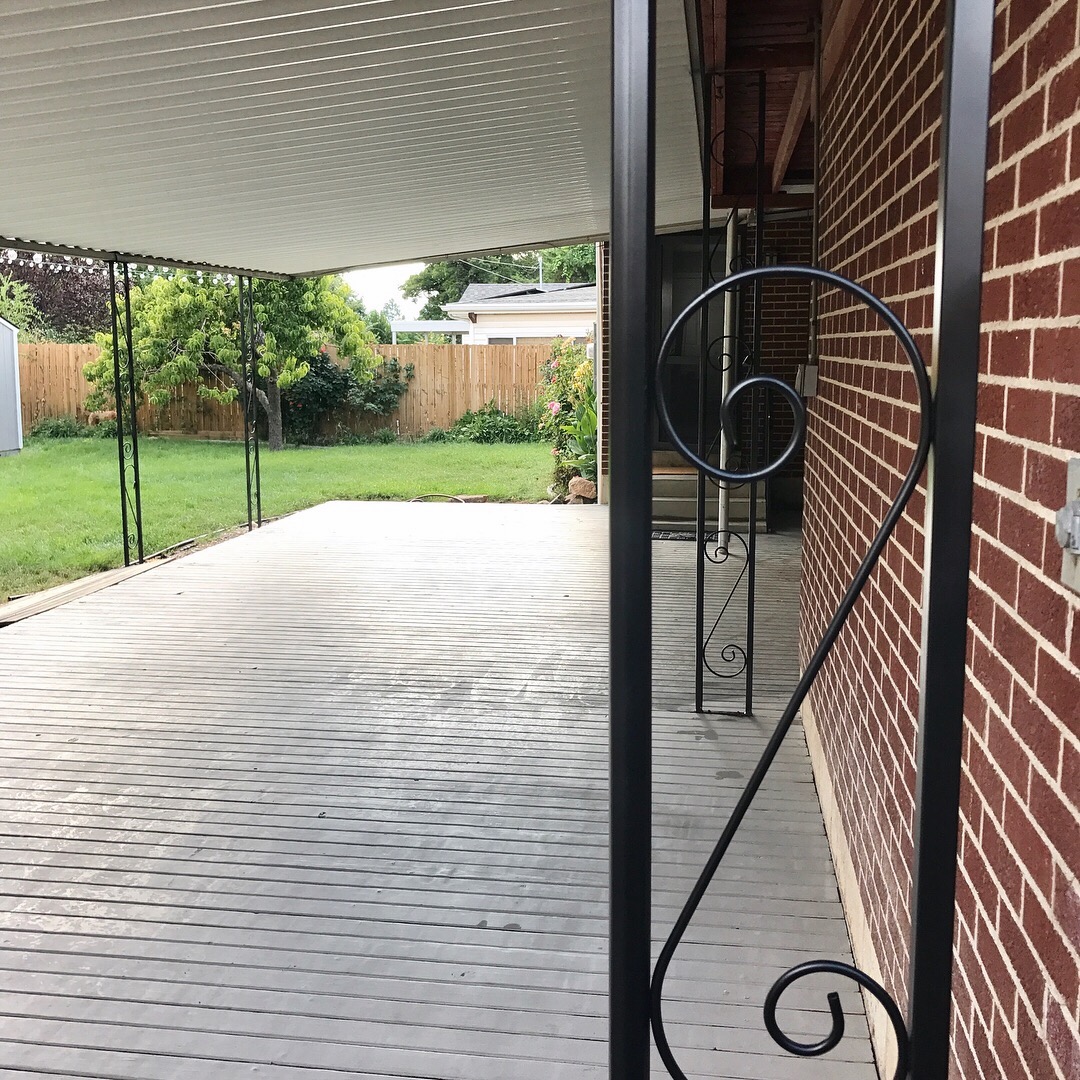 Finally, we replaced the light next to the door that you can see in the photo above with a more modern fixture from Lamps Plus. 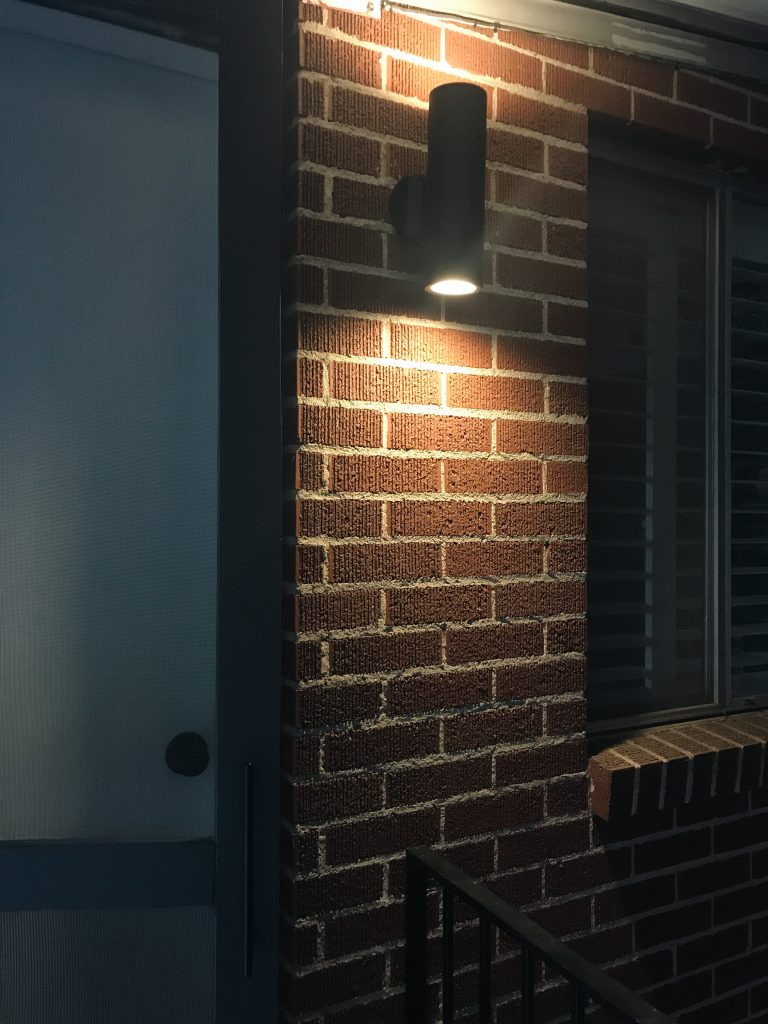 As the title of the post says, this is only a partial reveal. As of this posting, even though we ordered all the furniture for 2017 by the end of July we’re still waiting on this Tropez natural sofa from CB2 to arrive (just in time for snow!!). The downside on waiting until the end of summer to order your outdoor furniture is most everything will be on backorder (which we didn’t really plan on). However, the upside is we got pretty much everything pictured below on sale.

We still have a bit we’ll add next spring: Accessories, plants, possibly shades on the west end and that couch, but here is where we stand now.

The APPLARO table from IKEA (which was a great price) sits at the east end of the deck near where the fence was. The black chairs are the Sophia Black Dining Chairs from CB2 and the white chairs are the Acapulco Dining Side Chair by Harmonia Living. We love this space so much and can’t wait to spend more summer nights at this table. 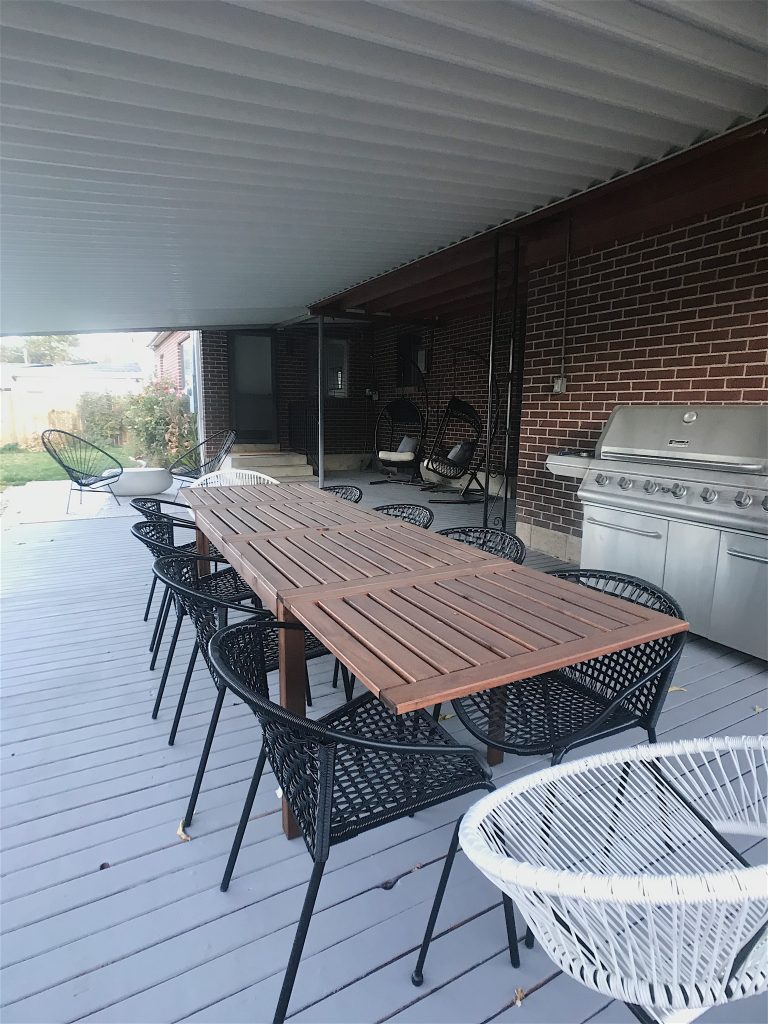 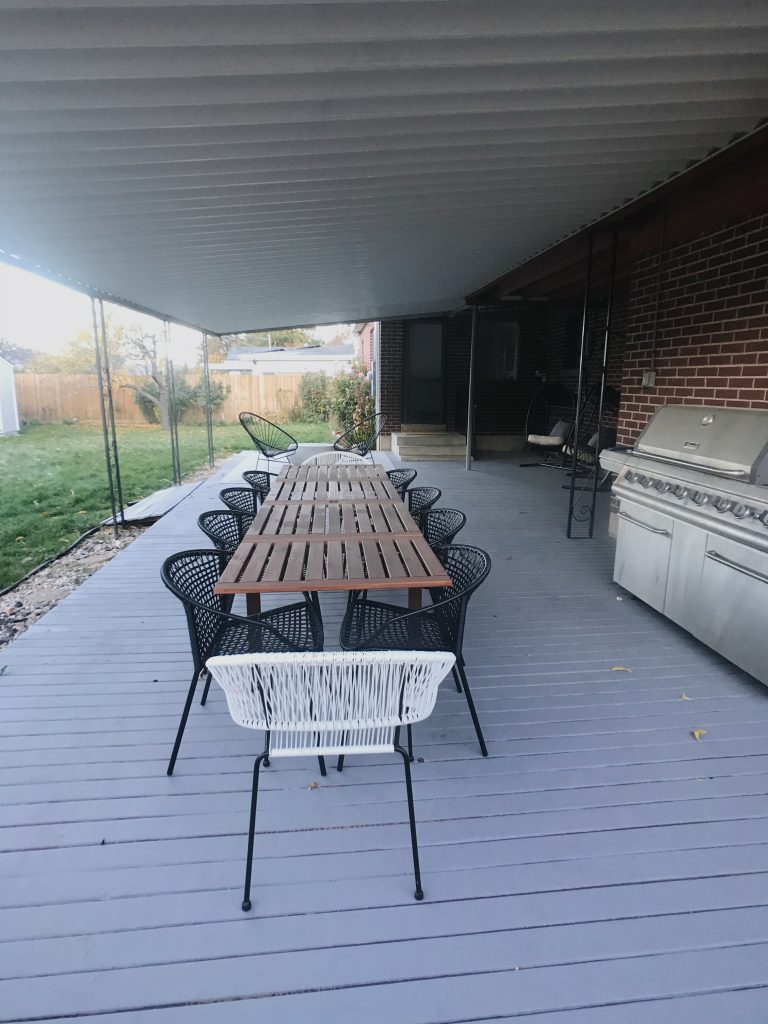 On the other end, we have two Acapulco black chairs from CB2, pebble concrete coffee table from West Elm and an outdoor rug from Wayfair. 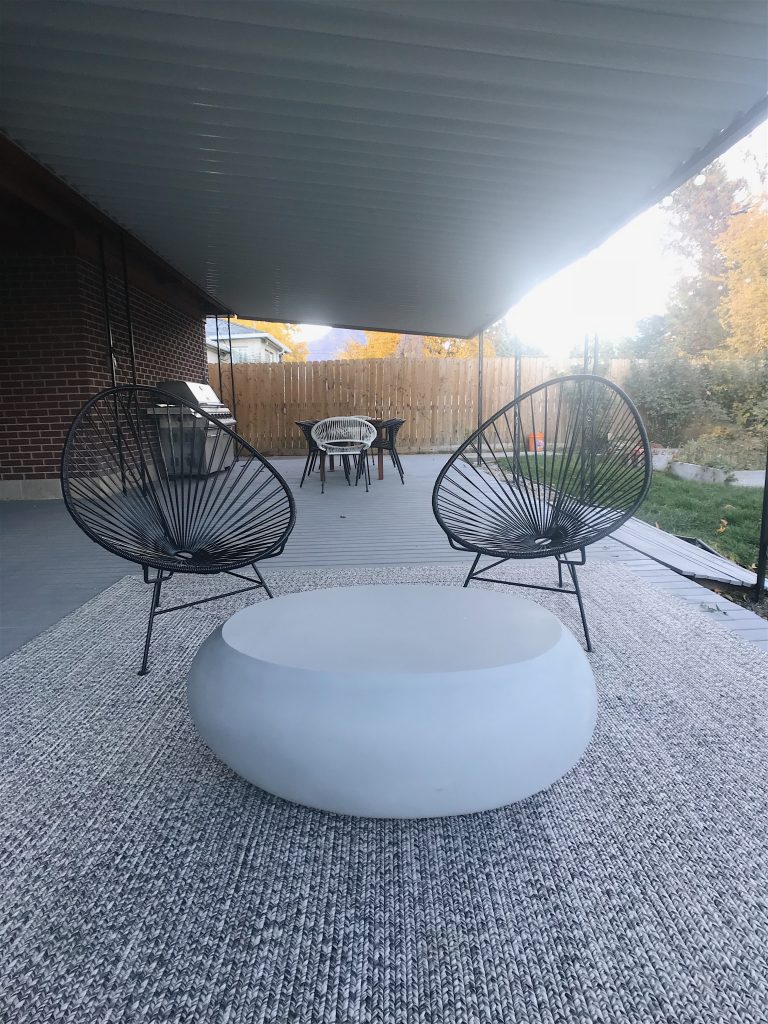 The third “zone” on the deck is on the north side and has two of favorite pieces of furniture: Swingasan hanging chairs from Pier One. The cushions on the chair are also from Pier One and the pillows are from Restoration Hardware. 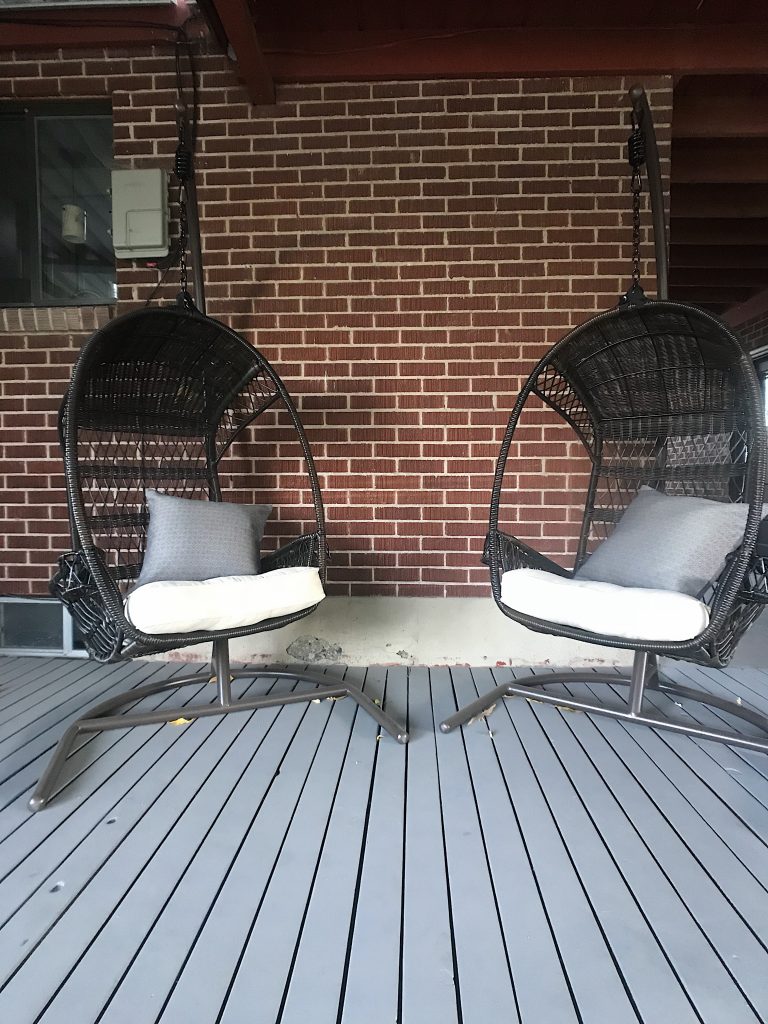 And there you have it, there’s our deck (for now.)

Oh, and for anyone reading all of our posts, we mostly did make Brian’s September 15 birthday deadline and were able to have his birthday on the deck. Exactly what we wanted.